9 Tips for Running a Restaurant 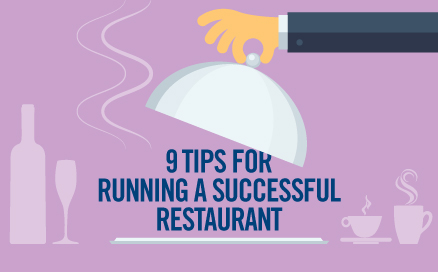 Hold pre-shift meetings: Duffy said he holds meetings before every shift so the staff knows exactly what’s going on for the day/night. They’re aware of what the specials are, what’s in them, how they’re cooked, and how they should be served. Sometimes, he said, it can be fun to announce contests each night like, for example, which server could sell the most dessert. “It’s a time for positive energy,” he said, “You want them to be excited to run the next shift.”

Don’t hide your budget from the staff: If your team doesn’t know what your sales goals are, they’re going to have a pretty tough time trying to hit them. Duffy says you should share this information before each pre-shift meeting and explain your balance sheet to the chefs so they can be held accountable for targeted food costs.

Utilize your team for marketing: “A lot of people fail because they don’t tap into people working directly with them,” Duffy told Nation’s Restaurant News. Chances are, 50% of the people on your staff are within the demographics of customers you want to hit. Utilize them to help you market to your target audience. They’ll know how and if you are missing the mark, and what you can do to change it.

Have uniforms: Ever wander into a store or a restaurant, need a question answered, and have no clue who to ask? Duffy says, “Individuality creates chaos,” so invest in some new uniforms for your restaurant; for your brand.

Taste test your menu before settling: Duffy asks restaurant owners to really think about who is developing their menu. Are you insistent on selling a product that isn’t selling? Do you have menu items that aren’t good for your target audience? Chef Duffy suggests getting your customers involved. Run specials on products you might want to try in the future and get their feedback. Ask if they liked it and if they would order it again. Don’t waste further time, money, or efforts on ideas that just won’t sell.

Plan ahead: And he doesn’t mean plan for the next week. Duffy says he plans for special events – like holidays, the Super Bowl, etc. – weeks in advance. In early February, writes Nation’s Restaurant News, Duffy will begin prepping for St. Patrick’s Day, and he starts Super Bowl planning in early December. Determine ways to keep customers in the restaurant and engaged both before and after an event. Choose people on your staff and delegate specific responsibilities early on.

Hire smart and slow: Don’t hire someone on the fly because a staff member called out and you’re a man (or woman) short. In order to hire the best staff, and ensure all of the ideas in this article are followed through with, you need people that are on board.

Use social media to engage: That’s what social media is supposed to be for, but, Duffy says, he often sees Facebook status updates that are not engaging in the least. He suggests starting to post early in the day and asking your fans what they want to see on the Happy Hour or specials menu that day.

Create a mission statement: They matter. Determine what it is your company wants to do, what you want the restaurant to be, and post it everywhere so your customers and your employees know it. And, most importantly, stick to it.

CONSULTING SERVICES
for a success you want the best

We're not around right now. But you can send us an email and we'll get back to you, asap.